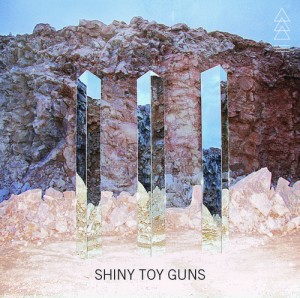 Remember MySpace? Not the abandoned wasteland barely hanging on by its domain name today, but the virtual place that—between 2003 and 2007—existed as a commingling of quick-turnover pop culture and socializing humans. Bands and fans could directly connect within its pages, and the site became a fertile Internet space for new music, like Shiny Toy Guns. On the quartet’s latest release, III, it doesn’t feel as though any of that time has gone by, which is endearing and exhausting.

After a long hiatus, vocalist Carah Faye Charnow has rejoined Shiny Toy Guns as its commanding presence; robotic and operatic, she strikes this balance best on opener “Somewhere To Hide.” Faye dominates vocal duties while guitarist Chad Petree interjects emotion when needed. “Waiting Alone” shows his ultimate strength in hanging back in the mix. Tracks like “Carrie,” “If I Lost You” and “The Sun” feel stuck in the band’s past, though, dragging down III with time-stamped synth lines and corny vocals.  But when Shiny Toy Guns is on point, the band is sharp. “Faded Listening” is the right retro sound, hearkening Erasure’s ownership of the electro-pop genre twenty years ago, while channeling Washed Out or Toro Y Moi’s more current sensibilities. It is a shame that more of III doesn’t embody this sound.

For the solidified Shiny Toy Guns fan base, III will be good enough, great even. Staunch STG listeners may appreciate closing track, “Take Me Back To Where I was,” which sounds like an awkward, ill-fitting ballad more suited for a special edition release. The band wears its synthy sci-fi soundtrack style well, it’s just a question of how relevant a happily reunited electroclash band can be to new listeners.