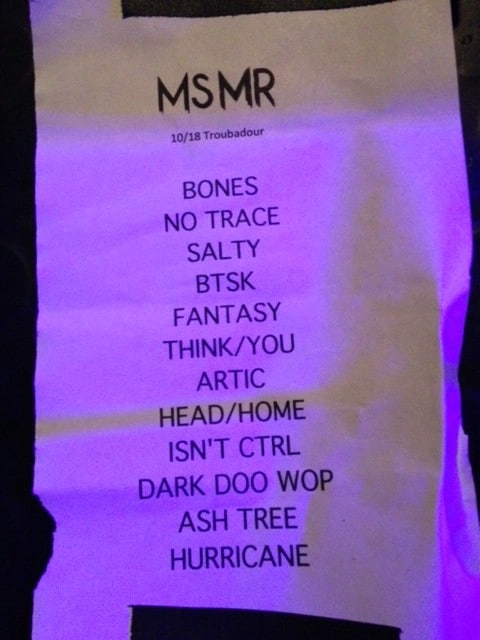 If you weren’t among the terminally hip New Yorkers, you may not have been aware of Lizzy Plapinger, co-founder of the 7”-only Neon Gold Records and its accompanying blog, until about six months ago. As one-half of MS MR (completed by Max Hershenow) Plapinger is not going to be able to keep her cooler-than-cool street cred for much longer. The multicolored-haired vocalist fronted Hershenow as well as two other musicians at MS MR’s two-night run at Los Angeles’ Troubadour concert venue. The first night was left with a scant 20 tickets at the door while the second night was completely sold out.

Plapinger draws predictable comparisons to Florence Welch, but in her painted-on black-and-white striped dress and radioactive-looking hair that switched between neon green and neon yellow depending on which light filter was being used, Plapinger marked her own territory.

MS MR is promoting its first album, Secondhand Rapture, which was released in May. Packed with punchy hits, the crowd—who were going nuts—knew every single song. Fully vested in the show and creating a heaving dance party, the audience provided as much of the energy as the band. This is not to discount MS MR, who with Plapinger at their center as a natural performer and an absolute star, were on point. Flanked by a sea of synthesizers, as well as a real bass and real drums manned by a powerful drummer, Plapinger and her bandmates were having themselves a whale of a time.

Starting with the moody number “Bones,” MS MR did a good job of not overwhelming its good looking, devoted crowd from the word “go” with all the pent-up energy it had stored gearing for the performance. By the time the group reached the taut “Fantasy,” the people in the venue were already piling on top of each other. And a little after that, they had everyone singing along in “Kumbaya” fashion while they themselves did a high-step march and Hershenow ended up in what looked like a tribal rain dance. Not having enough songs of its own, MS MR did a cover of the Arctic Monkeys’ “Do I Wanna Know” taking that number’s plodding energy and pumping it up with teeth-grinding tension. It would be interesting to compare the Arctics’ crowd reaction with that of MS MR’s audience. They ended on “Hurricane,” one of the darkly pop, strong songs of Secondhand Rapture, and a solidly unified feeling between themselves and the crowd.

With only the one album, MS MR departed without an encore, but leaving the crowd feeling grateful and like they were all part of an experience that was memorable not just for themselves, but for the band as well.

MS MR has now wrapped their North American tour; check back on Boxx Magazine for updates.