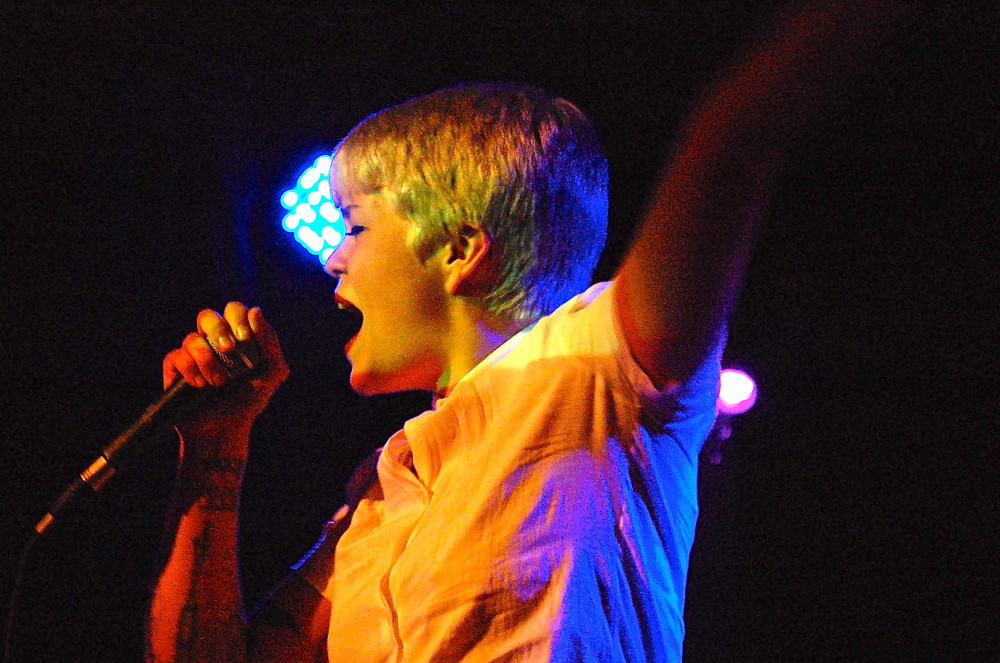 “Every show is band feelings time,” Perfect Pussy’s Meredith Graves once said in an interview. And she wasn’t joking. Beholding her aggressive punk collective in concert is like standing under a waterfall— the show is a deluge of furor, noise and untamed force. There’s a harmony in the cacophony, but at a moment’s notice, the dam can break and deplete all the power.

The Syracuse ragers descended upon the Echo in L.A. and tore it a new one. From the get-go it was apparent that Perfect Pussy’s live act and recordings were two separate beasts. In the latter, such as the 2014 breakout album Say Yes To Love (Captured Tracks), Graves’ impassioned shouts and riot-grrrl lyrics are cherry bombs, crimson red and hot. (No exaggeration, either—the front woman gave vials of her blood along with the special edition of SYTL.) On record, Ray McAndrew’s angular, squelching guitar work and bassist Greg Ambler’s heart-pounding, threatening licks add to the frenzy.

In the flesh, however, Perfect Pussy is an F5 tornado. Their massive amplifiers were a spectacle in themselves— big enough to act as mighty wind turbines in the small, sweaty club. Synths man Shaun Sutkus overwhelmed the mix, his alarming artillery of knobs and squawk boxes warning the faint of heart to call it a night. Drummer Garrett Koloski was the lighthearted scamp in the squall, donning a mercurial ponytail and an uncharacteristic smile as he pounded out the beats.

During the set, Graves took no shelter, screaming into the gale but emitting little volume herself. Her performance was a gut-wrenching pantomime, a too-real metaphor for the silence thrust upon women in the hardcore scene, in violence. She’d slam herself forward, practically retching up the inaudible words. She’d then swat them away with a militant swoop, reaching skyward for balance.

“We fade into the background,” the feral pixie sang in the relatively mellow “Interference Fits.” And so it was foretold for Perfect Pussy, done in by their gigantic amps and anarchic approach. The intimate gig was less a rock show and more a visit to the den of a taunted lioness. Graves crouched, leapt, growled, attacked, spat.

But if Graves was the mama cat, then the four young women in opening band Potty Mouth were the playful kittens. Lead singer Abby Weems, clad in a long black velveteen dress, was the most intense of the foursome, contorting her face as giddy fans fist-pumped and pogo’ed along. Bassist Ally Einbinder twisted her spindly instrument as though she were a gamine version of Green Day’s Mike Dirnt, while guitarist Phoebe Harris kept things jovial. For her part, rhythm-keeper Victoria Mandanas infused some delightful cymbal crashes and clap-worthy drumming.

Coming from the same neck of the woods as fellow lo-fi rockers Speedy Ortiz, Potty Mouth relied on similar to-the-point vocals and rubbery guitar leads. They culled on the grunge-era influences for their 2013 album, Hell Bent (Old Flame), which made up the bulk of their set. Standout track “The Spins” married Lollapalooza and Warped Tour sounds and got a small faction of girls in the audience to mouth back the lyrics gleefully.

Harris’ sole crack at lead vocals, the alterna-rock meets Bratmobile number “The Better End,” was a fun curio amid some of the more washed-out songs. “How’s it taste / the bitter end?” the cheeky musician asked. She punctuated the number with a shrill scream as her band mates hunkered down on their respective instruments.

Potty Mouth shared Perfect Pussy’s malady of burying the singing under too much distortion—a pity since both bands thrive on the strength of their words as much as their music. Maybe with some fine tuning, the groups can filter through the muck and amplify their messages instead.