– Pussy Riot! A Punk Prayer For Freedom (edited and published by Feminist Press)

Pussy Riot! A Punk Prayer For Freedom (edited and published by Feminist Press) 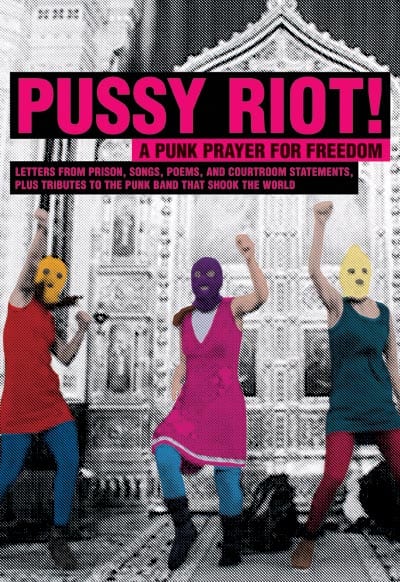 Pussy Riot’s infamous forty-second performance of “Virgin Mary, Put Putin Away” at Moscow’s Cathedral of Christ the Savior rocked the world last year when three members of the band—Maria Alyokhina, Nadezhda Tolokonnikova, and Yekaterina Samutsevich—were found guilty of felony hooliganism for the act and were sentenced to three years in jail.

The Feminist Press released the ebook Pussy Riot! A Punk Prayer for Freedom (not to be confused with a similarly titled documentary called Pussy Riot – A Punk Prayer) to raise funds for Freepussyriot.org, a fund supporting the band’s legal defense and other expenses. The book was compiled in order to historically document what happened during the controversial trial; it was re-released this February in a print edition and has some additional material not present in the first edition. Together, these documents work to tell a vivid story about the band through the experiences of the three members during the trial, through testimonies and letters juxtaposed with poems and songs by the band and tributes given by famous fans of the band, giving a closer look at what really happened and how the band’s punk prayer affected artists and musicians around the world.

The book begins with “Virgin Mary, Put Putin Away,” which begs for Mary to become a feminist and stop supporting the patriarchal order, who favors Putin. It’s not the song that causes the most fuss in the trial however. According to statements given during the trial, the controversy in Pussy Riot’s punk prayer is where the performance took place. No women are allowed in the area where Pussy Riot performed and bright colors are not allowed to be worn by women. The trial comes off as a witch hunt at times, where one witness compares the performance to a “witch’s ritual” and insists the women “join a convent” to pay for their sins. Others cited in the book consider the word “feminism” a profane word, despite knowing its meaning.

Closing statements from the women’s lawyers reveal a trial filled with human rights violations and fabricated evidence. During the trial the trio were not allowed to speak privately with their lawyers. They weren’t allowed adequate sleep or even food. Early on the band was told that if they plead guilty, they would have been free to go. By claiming their innocence, they lost all their rights.

Included tributes for the band include a letter to Pussy Riot from Yoko Ono and a song by Peaches and Simonne Jones called “Free Pussy Riot!” Bikini Kill’s Tobi Vail contributed an essay called “Punk As Protest: Join The Party,” describing the band as pure protest, because “they are not a part of the entertainment-industrial complex. They are on a heroic mission to speak truth to power.” The band is so punk they even reject punk music norms, although that has more to do with Pussy Riot being more of a radical feminist art collective than a punk band. The only way to beat the system is to work outside of it, and Pussy Riot’s trial and global outcry of support is further proof of music’s ability to change the world, in times when nothing else seems to work.