Home Queens of Noise: The Real Story of The Runaways

Queens of Noise: The Real Story of The Runaways 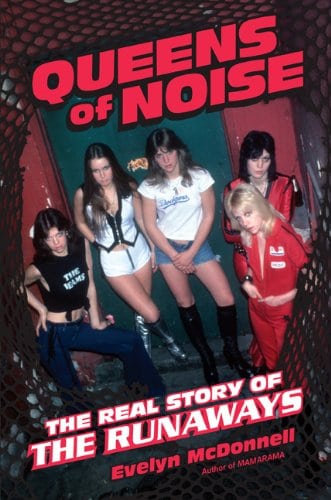 Even among obsessive rock fans and historians, The Runaways often go overlooked. It seems counterintuitive: After all, the band was where guitar heroes Joan Jett and Lita Ford gained their cred. In their heyday the group of teenage girls, brought together by producer and career weirdo Kim Fowley, toured the world, evading hordes of crazed fans in Europe and Japan and enlisting household names Cheap Trick and Tom Petty to open their arena shows. Drawing from influences as diverse as David Bowie, Suzi Quatro and Deep Purple, collectively The Runaways epitomized rock music in 1970s Los Angeles, their sound a unique triangulation of punk, glam and metal.

Despite the achievements—not to mention the talent—The Runaways’ blip on the cultural radar tends to be relegated to one fleeting image: 17-year-old Cherie Currie (or, more likely since Floria Sigismondi’s 2010 biopic, Dakota Fanning portraying Currie), writhing in lingerie and garters, snarling her way through the not-so-subtle innuendo of “Cherry Bomb.”

It’s not like that snapshot isn’t representative. It’s just that it’s usually presented without the necessary context. Evelyn McDonnell’s biography Queens of Noise (Da Capo Press, 2013) provides just that. Through meticulous research, painstaking corroboration and interviews with Fowley, surviving band members (drummer Sandy West died in 2006) and their peers, McDonnell sifts through a messy mythology and turns up sharp analysis of the band’s formation, its turbulent trajectory and inevitable demise and the members’ unstable relationships with Fowley and each other.

It’s no easy task, given that existing depictions of The Runaways (even among the tales the band members tell) tend to hype one of three distinct personas: innovators, vixens or victims. McDonnell smartly points out that The Runaways were all of the above. They were also a lot of other things: products of ’70s latchkey-kid culture, reflections of LA’s societal chasm and archetypes of teenage boredom and lust—all of which makes them so fascinating 35 years later.

They were billed with fellow Mercury Records band Rush, a confusing pairing that resulted in the spiteful prog-rockers denying their teenage tourmates soundchecks and dismissively heckling them during shows. Mercury ignored Fowley’s pleas to release “American Nights” as a second single from the self-titled first record, leaving jailbait anthem “Cherry Bomb” as the only source of radio airplay—even though “American Nights,” as McDonnell claims, “has all the makings of a hit, of a rock ’n’ roll party anthem to be played to death on classic-rock radio.” Fowley himself was at once the girls’ biggest advocate and their worst nightmare, and McDonnell’s interviews with—and about—the Svengali are insightful…and sometimes downright hilarious.

“I wanted vaginal teeth in the second album [Queens of Noise],” Fowley tells McDonnell. “I wanted guns in their hands. I wanted them to blow up the world and piss on rainbows and set fires. I wasn’t interested in doing a layered record for a bunch of assholes going to still dislike them and still doubt them.”

Through interviews with engineer Earle Mankey, Fowley and the band, McDonnell illustrates how and why things fell apart during the recording of Queens. Currie’s abortion (which resulted in Jett recording lead vocals on the thunderous title track), Fox’s pneumonia, evolving styles and exhaustion spiraled into irreconcilable differences that would signal the beginning of the end for the best-known iteration of The Runaways (Currie, Jett, Ford, West and bassist Jackie Fox).

To give The Runaways the credit they deserve is not just to put them on a pedestal or give them feminist-superhero carte blanche. It empowers them to be accountable for their whole existence—for better or worse—as powerful, talented women and as hormonal, rebellious teenagers. McDonnell admits that the girls at times “reinforced and propagated stereotypes of women in rock…they peddled low-grade, retro, soft-porn images.” But she also gives kudos where they are due, crediting the band with both influencing subsequent riot grrrl acts and cracking the male-dominated mainstream rock world; McDonnell cites the band’s longtime friendship with Cheap Trick and asserts, “Motley Crüe and Poison were practically Runaways tribute bands.” (Think about it; it’s true.) Perhaps the greatest testament to the importance of The Runaways is the fact that an analysis this exhaustive finally exists.

“Seeing footage of the band at the height of their career…it’s hard to believe they didn’t become one of the greatest acts of their time,” McDonnell writes. “We don’t speak their names in the same breath as the Ramones, Sex Pistols, Kiss, Aerosmith and Blondie.”

Thanks to Queens of Noise, maybe now we will.