Jessica Pratt opens for Julia Holter in Chicago with a set that is demure and poignant and just what the crowd needs after a busy Pitchfork weekend. […]

Snow White at a theme park? Scout Niblett loads into character on “Gun.” […]

Eleanor Friedberger may best be known as one-half of the Fiery Furnaces but performing songs from “Personal Record” live, she comes into her own. […]

With the record release so fresh and Thao out of the spotlight for so long, it was a pleasant surprise to see a packed Lincoln Hall waiting for her in Chicago. […] 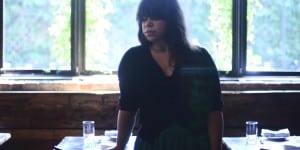 On the Line with … Samantha Crain

It has come full circle, actually. Musically I’ve been reverting back to Songs of the Night, an album that had a sort of indie style. […]

Since their beginning in the mid-2000s, minimalist noise pop had been Brooklyn-based duo Talk Normal’s staple. Their sound is a mere pledge to a no-wave noise that the two have crafted and perfected into a genre of their very own. Sarah […]

Video of the Day: The Ocean Floor “My Shelf”

The Empty Bottle, while seemingly a perfect setting for the West Coast indie-punk darlings Grass Widow, was nothing else but well attended. The night’s lineup was sloppily arranged with Wet Hair and two other not-so-memorable opening bands deemed “Riot Grrrl,” a label that Grass […]