Home – The Spotlight Is On For D.C. Band Drop Electric

– The Spotlight Is On For D.C. Band Drop Electric 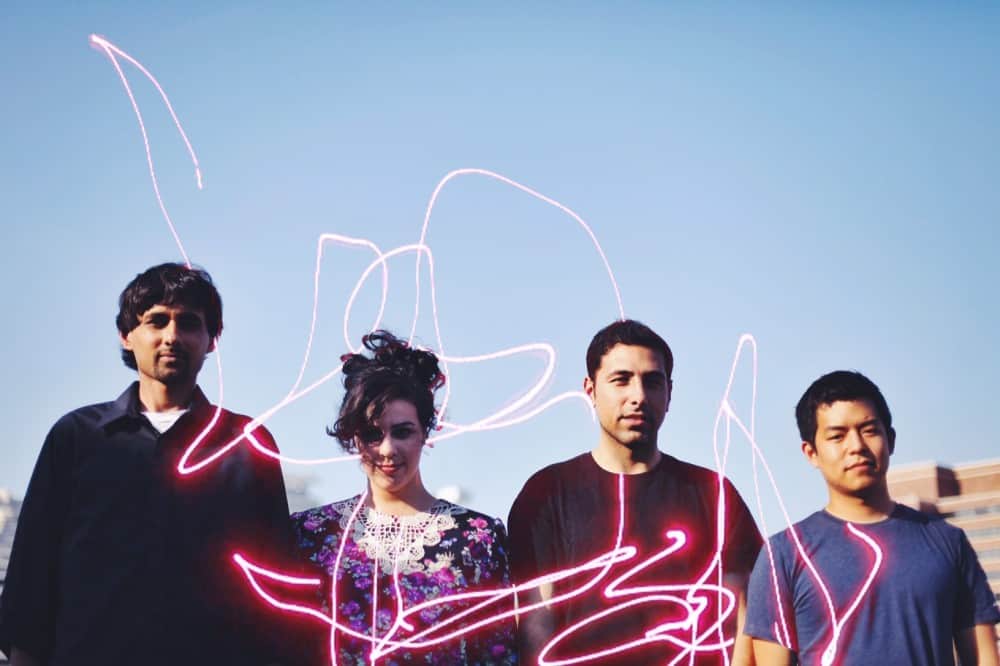 Kristina Reznikov’s recording studio is in the corner of the one-bedroom apartment she shares with her girlfriend, Genessey. A woman who grew up doing the kind of singing she describes as “yelly,” Reznikov now has to keep it down in this old apartment building in Washington, D.C. Thankfully, Genessey doesn’t mind the studio or the noise. But for the neighbors, Reznikov is considering padding the walls.

The 27-year-old first got into recording at age 12. She walked around with a hand-held tape recorder interviewing people or asking them to sing for her. When she got a four-track Tascam, she recorded the songs that she and her brother, Nicco, played. They were in bands all throughout high school. She played guitar and sang while her brother was on drums. Her first digital recorder, a Fostex, planted her squarely in front of the computer. “My brother would come in my room and just sit there and watch me almost like I was a science experiment,” Reznikov says. “He’d bring in a book and do homework and watch me. I’d have my headphones on, all my wires wrapped around me. I loved those days.”

In 2011, the D.C. band Drop Electric was looking for a guitarist when Reznikov answered their Craigslist ad. When they realized she could sing, the band got what drummer Ramtin Arablouei calls their “narrator.”

“I think in every band, whoever is writing your lyrics tells the story or narrative of your music,” he says.

Reznikov’s narrator is a smoky lounge singer with a smooth scream above their electronic rock. On their still unreleased album, Out of the Dark, the band scaled back the reverb from their earlier work so Reznikov’s lyrics are prominent.

Ramtin and Neel Singh started Drop Electric in 2009. Ramtin calls their music cinematographic; Warner Brothers paid them to use the song “Santo Domingo” in IMAX trailers for the sequel of the film 300. It’s also drum-heavy, with rock guitars and an electronic backbone, and it takes up the aural space of an orchestra.

When I shared news of the band’s latest concert on Facebook, I wrote: “Space age music for your space age lifestyle.” That’s not too far-fetched either. Their song “Empire Trashed” was featured in the documentary I Want to Be an Astronaut, which premiered on the International Space Station in March.

I met Ramtin a year and a half-ago through his fiance, and we clicked. He points to the fact that we’re both immigrants. Or maybe it’s the fact that his great-grandmother was Russian, like me.

His ideas and voice can fill a room with conversation for hours. “What excites you now in the music world?” I ask. It’s a big question for an artist who regularly fills my Facebook timeline with angry rants against mainstream music. Sometimes he seems hopeless.

“Juliana Barwick,” he tells me.

People who otherwise wouldn’t have made music are making music now, he explains. Barwick’s looping pedals, for example, and the other tools available to today’s electronic artists allow her to create her fantastic chants. With her live shows, she gets on stage, plays a chord and stands there in silence for what must be minutes.

“And, as an audience member, I love getting fucked with,” Ramtin says. “I love being surprised.”

Drop Electric is constantly producing. Two entire albums are currently unreleased. “We have so many songs in the proverbial vault,” Neel says. “Our thing is, while we’re together, let’s write as much as possible and get as many ideas as we can.”

After they released Waking Up to the Fire last fall, which was composed mostly by Ramtin and Reznikov, Drop Electric switched gears to include more input from the rest of the band. Everyone wrote and rewrote and rewrote, and everyone had a say about what stayed on Out of the Dark. ”We all sit there and even if one person doesn’t like a song, we’ll eliminate it,” says Neel.

For Reznikov, those fragments or even entire songs that were rejected are precious. “I love my scrap songs,” she says. She’s releasing them under the name Blanche Has Friends, a solo project she started this year. “I was working by myself since I was nine,” she says. “I’ve missed working at that little desk.”

In 1995, Natalie Merchant gave an interview to Entertainment Weekly, explaining why she left the band 10,000 Maniacs. “I didn’t want to have to consult with all these other people. I didn’t want art by committee anymore.”

On July 21, two days after the band played their latest show, Reznikov quit.

When we spoke a week later, she told me about Natalie Merchant. I asked her how she felt now that she left the band. “I know I made the right choice in how happy I am sitting at my desk writing my own music.”