Home – Zoya Is Bringing The Noise, And We’re All Ears

– Zoya Is Bringing The Noise, And We’re All Ears 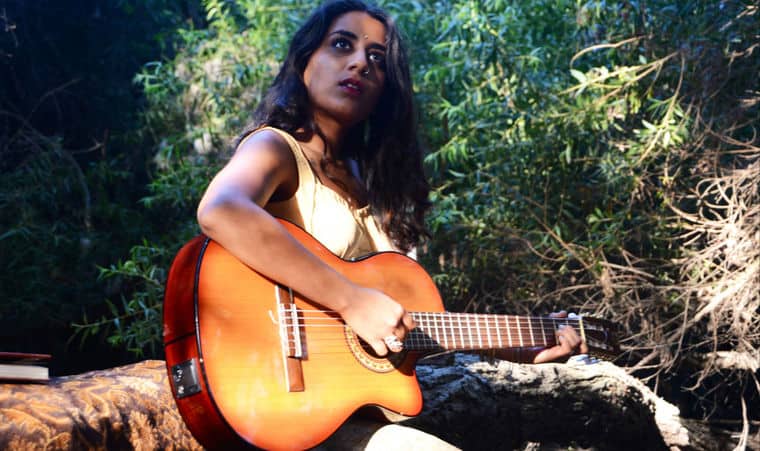 Born in India, raised in Southern California and transplanted to Boston, singer-songwriter Zoya Mohan has several different cultures and sub-cultures influencing her—and she’s worked her way through just as many permutations of who exactly she is as an artist. The folk singer strumming away at her guitar today, however, presents us with an artistic voice that is cohesive and distinct. At a time when most people her age may feel unsure of themselves, Mohan conveys an inexplicable and steady sense of self: she knows exactly who she is and what she wants to do.

One mild and sunny afternoon in Chicago, Boxx contributor Lauren DeGroot had the chance to speak to the recent Berklee grad. On her side of the country, it was an unseasonably rainy day in Boston, but that didn’t seem to dampen her spirits whatsoever—possibly because she’d just finished the last class of her entire college experience. Instead of letting the wide open of post-graduation scare her, Mohan was enthusiastic, grounded and altogether fearless as she spoke.

As someone wielding both a music business degree and a microphone, there isn’t a thing Mohan does without integrity, and that comes through in her work: whimsical and experimental, but never for a second vapid. There’s a message in every line she pens—sometimes about herself, sometimes about the world—and she desperately wants you to pay attention.

Lauren DeGroot: I know this is the question college grads totally dread, but do you have any plans for the immediate future?

Zoya Mohan: I’ve decided to stay in Boston, actually, for the next couple months. I’m working on a full-length album right now, and my band and all my musicians are here. Berklee provides a lot of access to rehearsal space and things like that. I decided to stay just to finish this album and continue shows here and in New York. Then I’m planning to apply to Master’s programs in London and hopefully moving overseas next year. I don’t know why, but I have this feeling that I need to go there for my music.

I work here in Boston, too. I’m an organizer for the Spoken & Sung Sessions, which is a bunch of poets and musicians and songwriters that we host events for around the city. Then, we film them and release the videos. Also, I’m managing a couple artists around here—including myself—so it’s a good place to be for now.

LD:I’ve read that you actually got into music via dance. Is that true?

ZM: Yeah, I guess I got my influence from my Indian culture. I started when I was younger, dancing under my instructor, Nakul Dev Mahajan. Now, he does the choreography for “So You Think You Can Dance,” but he used to come to my garage to teach me Indian dance. Then he became huge here, which is really cool. But that was like my first experience of learning Hindi songs and getting into music. And my family really promoted us doing art stuff. So I would paint and I would dance, and they would throw huge parties where everyone would sing and dance and perform.

I was always around music, and I started writing when I was 13 because my dad got me a guitar. I think a lot of it came from just being around that and being around a family who played music as well.

LD: You seem very artistic in general. Do you draw from multiple mediums for inspiration?

When I started writing music, I realized that’s what I wanted to do because music was the most challenging. Out of all of them, music is so different everywhere around the world. I felt like painting is kind of the same wherever you go; it’s the same craft, you learn the same principles. With music, there are all these different types of ways to write. It felt like something I could constantly be learning from and I wanted that challenge, so that’s the one I decided to stick with.

When I’m writing, a lot of the time I’m thinking of specific images of things that have happened to me. I write in more of an illustrative way, I think. Like, one of my songs, “Fire”—it’s very image-based. It’s things that I felt, but I put it into image form, especially images of nature. I always add nature.

LD: Can you talk about how your upcoming album The Girl Who Used to Live in My Room compares to your EP Letters to Toska

ZM: Well, Letters to Toska was a formation of a lot of things that happened to me. I came to Berklee College of Music and I decided to study Music Business. So for the first two years here, I was working in the industry managing a bunch of artists. After two years, I was just like, “What am I doing?” I’m at the best music school, and I’m not doing what I actually love and what I’m really passionate about.

I decided to record Letters to Toska completely in my room, on my own. I edited everything, I mixed everything, and it was just a very natural process. I think the difference between that and The Girl Who Used to Live in My Room —well, first, it’s going to be a full-length album and not just five songs—but also, the instrumentation. With Letters to Toska, we experimented a lot with percussion, with mandolin, with flute and things like that. But this time we’re adding a lot of different instruments from around the world.

I’m recording a lot in the studio this time instead of my room, which I like and dislike at the same time. I feel like when you’re recording in your room, you have more room to experiment. When you’re in the studio, there’s a time constraint and a bunch of different elements that don’t really let you experiment in the same way. We’re trying to fuse both worlds now.

The Girl Who Used to Live in My Room is kind of a reflection on who I used to be and who I want to become now. We’re also drawing some elements from witnessing other women, and seeing their reactions to life, and men, and circumstances of love and situations that happen to us.

LD: What was your favorite song on your upcoming album to record?

ZM: I think my favorite song so far is “Lunar Eclipsed.” I got the opportunity to work with Kiran Gandhi, who is M.I.A.’s drummer. She is one of the most amazing people and really inspired me in a lot of ways. This song itself is more about putting the circumstances of my life into the elements of nature, so it’s all about the sun and the moon and how they can never reach each other. How every element in our world is constantly trying to connect but they actually don’t ever touch. The lyrics and the way we created the music for it is really kind of complimenting the lyrical content. The instrumentation is really cool—to have Kiran on it is really, really amazing. I can’t wait for people to see the video.

LD: You actually recorded two albums in India at a young age, correct? Can you talk about what navigating that process was like?

ZM: I’m really thankful I had that experience because I got to understand the recording process and how it works in the studio at such a young age. The first time, I didn’t even know how to play guitar yet. So I came into the studio with a bunch of melodies, and I got the opportunity to collaborate with a band who worked around me and what I saw for the songs.

The second one I did in India I thought was more cool because I was actually writing the music, too. But at that point in my life, I didn’t really know what my sound was. So it turned very pop, which is so different to what I’m doing now. That’s why I came to Berklee and why I did Letters to Toska completely on my own, because I wanted to find my sound and stay true to what I wanted, rather than what some producer was telling me to do.

LD: Tell us a bit about the Spoken & Sung initiative and how you founded it.

ZM: I think it was a culmination of working in the music business while doing my own music and being a woman in the industry. You find yourself in positions where you watch how people are running stuff, and when I was managing a bunch of artists, it seemed like most of the venues and promoters wanted artists to only play because they wanted people to dance and buy drinks. So that’s how they choose the music that comes into the club. As a songwriter, I was talking with my good friend—award-winning spoken word poet Ethan Walker Smith—about how we wanted to just put on a show of songwriters and poets where people just sat down and listened to what they had to say. Because I feel like that culture has kind of left our society now, the culture where people are inspired by the lyrical content of what artists are trying to say, rather than just trying to get up and dance.

So we decided to do a couple shows, and it started off like that. Then we decided to make a name for it and release the content, and after that it became something where we’d get messages from people who wanted to do it, too. So we decided to continue it on, and I thought it’d be so cool if it could spread to different states and countries. To have, like, Spoken & Sung: London or Spoken & Sung: France.

LD: It seems like you’re involved in so many things. What are you doing when you’re not working?

ZM: I’m never really not working. If I go to a show, I’m not working, but I am at the same time because I’m always networking and stuff. But it’s something that I love to do so it’s not really “work,” in my mind. Even Spoken & Sung—coordinating it, doing all the PR for it, booking—I love it. It’s something that Berklee has thankfully trained me to do. It’s just fun. It’s all fun.

LD: Can you name any women who have helped inspire your work or your life in general?

ZM:Maya Angelou and Fiona Apple. Ani DiFranco, too, for sure; she started her own label when she was 18 and has constructed her whole company and her music so well. I’m very inspired by her career and her music. I’m definitely inspired by Camille—she’s a French singer-songwriter who experiments with her voice in a way I’ve never seen before. My mother I’m inspired by. Also, Kiran Gandhi—she’s taught me a philosophy of life called “atomic living” that has really changed the way I think about how I live day-to-day. And definitely a couple of my music professors—they’re amazing women who have worked in the industry and have so much influence on their students. They just know so much, and it’s cool to see that women can actually make a change in the industry and contribute to the next generation.

LD: Can you impart any advice to women, young or old, who are looking to become musicians?

ZM: Do it all on your own, and don’t be scared to. Doing everything on your own—from recording, to managing to booking to making a place for yourself in this industry—is the best thing. Because then you know what territory you’re running on and how to utilize everything around you. Also, you seem more in power rather than just following someone else’s lead. Be your own leader. I think that’s the most important thing I’ve learned—and to not give up.